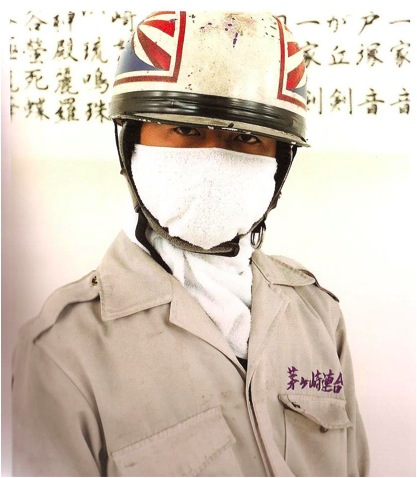 I can remember the first time I uttered the word in public. My class of elderly ladies giggled. My useless textbook had translated the term unbelievably loosely as teenager. It was frankly, a shit translation.

Sayonara Speed Tribes does a far better job of conveying what the word means; what it is coming to mean.

Literally the term bou-sou-zoku (暴走族) translates as violent-speed-tribe. It was a handy term coined by Japanese newspapers during the heyday of the biker gangs that emerged in post war Japan to describe the loitering youths, the joyrides on motorbikes and the violent clashes that occurred when these groups crossed paths.

By the 70s these groups, like all subcultures tend to become, were highly ritualized and ironically as subcultures always seem to do reproduced much of what they claimed to be abandoning and rejecting.

These bosozoku wore the uniforms of kamikaze pilots, ran their gangs in shades of samurai honour and enforced the sense of senpai and kohai that remains a dominant thread in Japanese life. They even retired from service, slipping either into the normal life of salary man or the criminal world of the Yakuza.

To me, the whole thing bears a disturbing if occasionally comical resemblance to a high school club. The uniforms, the training, the ritual, the respect for one’s elders and the necessity of carrying on the torch for them when they leave are all hallmarks of the life they apparently reject.

But things are changing.

Modern police tactics and the passing of time have led to a steep decline in bosozoku numbers and a move from violent outcry of youth and rebellion to pick and mix cultural identity.

It’s at this point where Sayonara Speed Tribes picks up the story.

Sayonara Speed Tribes follows the path of someone who stands with a foot in both worlds.

That someone is Hazuki, a legend within the bosozoku world. He is also a man left stranded by how quickly that world has changed, by how much he himself is desperate to change.

Fascinatingly, Hazuki lets filmmaker Jamie Morris into his life and allows him to see the changes he’s trying to make, the life he’s fighting so hard to build as at the age of forty he attempts to leave the world of bosozoku and Yakuza behind in order to follow his childhood dream into the kickboxing ring and beyond.

It’s an at times funny and moving documentary as Hazuki proves to be the perfect thread to follow between the past and the present realities of these groups. A charming figure, it’s hard not to root for him, not to hope that he’ll find the happiness and respect he craves.

Yet, Hazuki bears all the markings of his tribes, the tattoos and the scars of violence. In trying to leave his youthful world behind he still cannot shed the signs of his past life and rebuild.

For all that struggle though, I recommend you watch him try.

To learn more about the fine folk behind this documentary visit Figure8 Productions.