Every Sunday since the end of January I’ve been dragging my sleep deprived self out of bed at six a.m. to crawl into the shower, quickly shave, wrap up warm for the twenty-five minute walk down the street to the local train station to hop on the early morning bullet train bound for Tokyo.

It really isn’t that far away, in reality I probably spend almost as much time walking to the station and changing to the Tozai subway line in Tokyo as I do on the bullet train to Tokyo itself.

Well I might as well live on another planet. The shock and awe that I come from a different prefecture is entirely at odds with just how pleased Japan is, and rightly so, with their wonderful bullet trains and remarkable local train services.

It’s a wonder, a marvel I say!

You traveled for more than thirty minutes?! Good lord man, was it entirely necessary?

This is not an accurate translation or reflection of the people speaking by the way. This is how I translate it in my head for my own amusement. If I’m particularly bored I might translate it directly into the Yorkshire dialect…

Tha came from over yonder that there hill? Ecky thump!

Anyway, I’m drifting off here, back to the case in point.

I’m on a teaching course over in Tokyo every Sunday for the next few months and so I’m spending an awful lot of time heading up and down the Tokaido line.

My journey along it could not be more unremarkable despite the protestations and shock of those who call Tokyo their home. As far back as 1700 it has been endlessly traversed and is now the most traveled route in Japan as it links Tokyo, Yokohama, Nagoya, Kyoto, Osaka and Kobe.

Unlike the original travelers along the Tokaido though I’m heading by train, shaving a nice twenty-two hours off the journey by foot in the process. In that context my 230km weekly round-trip journey seems both remarkably speedy and yet utterly ordinary in regards to my own effort.

But therein lies its charm to me.

My morning commute by shinkansen (Bullet Train) seem to flash by in a haze of coffee and mini-croissants purchased on my amble down to the station.

I take the time to tweet or facebook my sleep deprived state, because if I’m suffering, then well, I want you dear followers to know about it. Comedic suffering that is; I’m far too English to reveal actual suffering… not that I do have any of that… sod it, you get the point.

Then provided I’ve hooked up my IV drip of black coffee, mainlined straight from coffee can to my veins, I will quite jauntily bound through Tokyo station to transfer to the Tozai subway line. At nine-ish on a Sunday morning it would be fair to say that I bound somewhat out of step with the rest of the early morning populace, hardly aware they exist beyond some imagined bonus level of Tokyo 3D Frogger: Dodge the Commuter!

In contrast, my journey home by local train, if I’m not too tired, is a fine opportunity. I’ve chatted to families returning home from a visit to the grandparents’ place (the daughter doing her English homework on the way), observed all manner of sleeping positions, been slept on/against by an innumerable number of strangers, almost fallen asleep and face planted into the carriage floor while leaning forward to read my kindle (a rookie mistake a Japanese would never make), snickered too loudly at The Bugle podcast (much like the Tube in London, one should remain an emotionless zombie whilst riding on public transport here) and drawn undue attention to myself as a result.

While the journey may at times be productive, more often than not it seems to take an age. After close to two hours heading south I change at Atami for the next step of the journey and fifteen minutes later exit my local station. I begin my walk home, buy a nikuman (Chinese style steamed bun) from the Konbini (Convenience store) along with a couple cans of beer in all likelihood and shuffle in the front door at around nine o’clock having left the classroom around six. I make dinner, box up the next day’s bento for the day job and hopefully crawl onto my futon before midnight.

On a good day, I feel like I’m getting the hang of the commute, moving from amateur commuter to professional in no time at all.

The next day I arrive at work around eight fifteen (ok more like eight twenty…five…ish) and immediately see the P.E. teachers who’ve been at school since seven, who’ll be there until nine that night.

I don’t know how they do it.

Compared to these teachers, I’m just a rookie. I do that long day once a week, they do it every day and they do it while working their socks off.

I’m not ready for the big leagues yet. 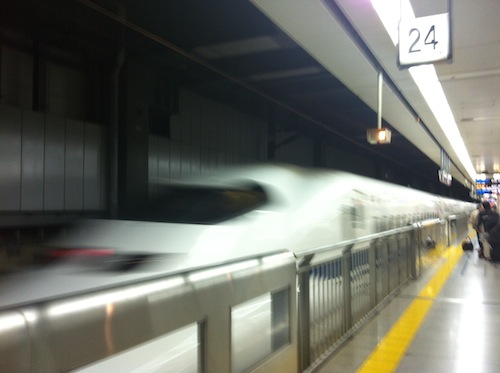