The Ojigi’s Up Part 2: Dogs and Monkeys

So where am I now?

How far gone am I?

Well evidently I’m at the stage of ojigi-ing to strangers on the tube, I also accidently said sumimasen (excuse me) to a group of people earlier that day as I made my way through a crowded corridor at Paddington station. Fortunately I rather mumbled it and beyond relaying my embarrassment to my friend who was with me at the time I doubt anyone else was the wiser.

But, Japanese is there now, firmly locked into my head for at least as long as I live here and that is beginning to have other side effects beyond excessive bilingual politeness.

Because not only is it locked in; it wants to get out.

It wants to show off. Or I do. Frankly I’m not sure where to draw the line.

First of all there are natural trigger points for the language. It has in some way become automatic as the incident with the inadvertent sumimasen-ing demonstrates. If I’m thanking someone at a shop 99% of the year I’m saying doumo (thanks) or arigatou (thanks) and if I happen to be in Kyoto well I’m saying okini (thanks for saying thanks). Ta very much is generally no longer on the menu. It’s on the specials board but only makes an appearance around Christmas time. It’s a seasonal specialty if you will and makes about as much sense to the Japanese as the idea that Yorkshire pudding is not a dessert. 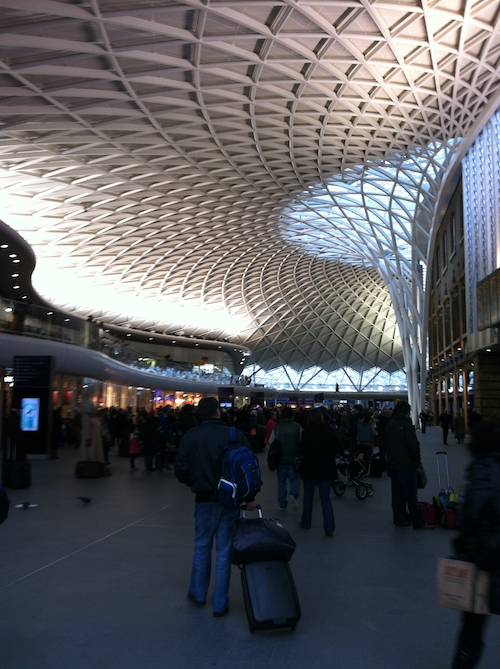 Home sweet… wait I am in King’s Cross, right? Great, like I wasn’t confused enough.

Then there are the moments where a Japanese word would actually work far better than an English word.

Natsukashii which translates as nostalgia or ahh that takes me back works far better in Japanese and conveys a multitude of feelings in a tenth of the time it takes in English.

Genki which means how are you? Is not only the question, it’s the answer. The how are you? exchange boiled down to two words.

Also it can be used to describe a hyperactive kid, a naturally energetic person and a person surprisingly energetic for their age too.

Japanese; more in common with a swiss army knife than a katana.

Then there’s KY. It’s short for kuuki yomenai and directly translates as can’t read atmosphere. I’m sure you know these kinds of people; most of us at some point are one after all. But as short hand for your socially useless mate or relative it’s a real time saver and compares favourably to, “Him? Yeah, he’s lovely when you get to know him…no, I know he seems like a dick now but…”

So there you have just a sliver of what’s going through my head as I walk around my hometown. A constant but rather patchy subtitling system throwing up possible alternatives that fulfill the criteria of being better than the more common term but then rather falls down on the fact that you are the only person within god knows how many square miles who has any idea what you’re saying.

It’s like dogs and monkeys I suppose (cats and dogs, a bad relationship).

There’s only one thing for it.

Talk to the family dog.

I may have taken the idiom the wrong way.

This may be chronic.