There were a couple moments the other day when I was reminded that Japan does things a little differently. It was about 7pm at the Yokohama Octoberfest, every seat was packed and people were clearly enjoying themselves when a couple of foreign guys stood atop their benches to greet the rest of the crowd. They promptly got a friendly response from all the other revelers but were just as quickly and politely told to sit down by security (a security I hadn’t even noticed until that point). They didn’t complain, they sat down with a smile and everyone carried on as normal.

That this only happened once in the few hours I was at the festival didn’t betray a lack of good times. On the contrary everyone was thoroughly enjoying themselves and when the German musicians came out to greet the tables outside the main tent they got a fantastic reception, glasses and arms swaying as we all cheered along. 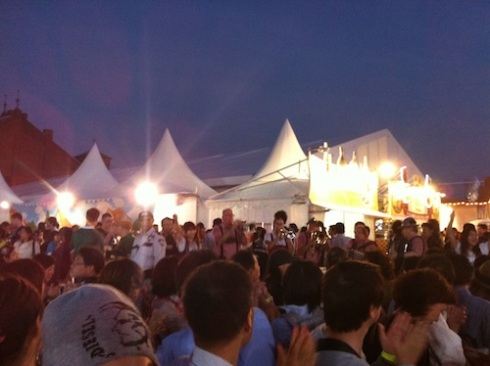 So what was different about it all?

To me, I guess it simply felt more grown up.

I hesitate to use the phrase as to suggest that the Japanese are in someway more mature than other nations, to imply that kind of comparison between nations at all feels condescending.

The truth is that what I’m talking about isn’t maturity but a manifestation of culture.

Though people of a European or North American background make up less than 0.5% of the population in Japan the figure is marginally higher in Yokohama which prides itself on being an international city.

Nonetheless however, Yokohama is still overwhelmingly Japanese and as such so was yesterday’s event. Japanese culture, not an international mix was the dominant force in setting the atmosphere of the day and so I doubt 95% of the crowd would even consider for half a second, no matter how heartily they’d taken to the festivities or yards of Heineken they’d drunk (if the crowd wasn’t that international the choice of beer certainly was), clambering atop their bench and drawing all the attention of the other drinkers towards them. 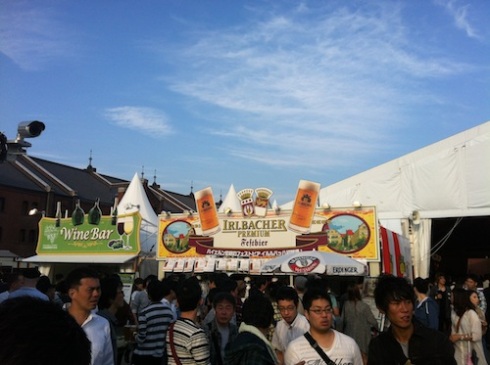 What makes this even stranger is that this kind of behaviour, from a British point of view at least, ought to be more pronounced at a Japanese Octoberfest. That Far East Asian people often have a lower alcohol tolerance than other ethnic groups is a fairly commonly held conception (I wouldn’t like to make too much of a claim as to its veracity, anecdotally at least it seems to hold true…ish) as such shouldn’t there be more not less drunken shenanigans? Hell, even based on the lower average height and weight of the Japanese this ought to hold true.

Once again I’m inclined to believe that culture trumps genetics because as Kate Fox of the SIRC (Social Issues Research Centre) noted in her episode of Four Thought  on the BBC last October, alcohol by and large has little to do with how we act as a nation when knocking back the booze. Far more powerful are the myths and narratives that we build around it. The self fulfilling prophecy that imbibing A inevitably leads to B putting a traffic cone atop a bus stop. Or as she rather more academically describes it,

“The effects of alcohol on behaviour are determined by cultural rules and norms, not by the chemical actions of ethanol.”

The article further mentions that countries like the UK and US have something called an ambivalent drinking culture, in that we assume all manners of behaviour, usually negative, to be the by product of alcohol consumption.  However, in Integrated cultures e.g. many Mediterranean countries, alcohol is seen as morally neutral  therefore these kinds of negative behaviour aren’t associated with alcohol consumption per say.

So where does that leave Japan?

Well, certainly many things that might be considered to be a moral matter here such as sex and gambling, aren’t viewed in quite the same way as they are in countries with a different religious background. Certainly alcohol isn’t seen to be as much of a moral issue as a practical issue.

Take a look at the decline in Salaryman pocket money over the years or the tradition of handing over one’s pay cheque directly to one’s wife in Japan for example. Men drinking too much isn’t so much a moral problem, it’s a practical one. There are home loans, children’s educational costs and taxes to pay first and if there’s something left over then the husband might be able to spend it on a night at an Izakaya.

There’s one problem with my argument though.

Yes, culture appears to dictate what is acceptable behaviour while drinking, however, while national cultures are persuasive in this way (and the Japanese have the proverb, “the nail that sticks out gets hammered down” for a reason) sub-cultures are equally if not more persuasive at times. So as you read about the surprising maturity evident at an Octoberfest event of all places, there is most probably a drunk salarayman asleep across four seats of the train disproving my foolish notion.

Ah well, let’s just stop worrying and enjoy it shall we? 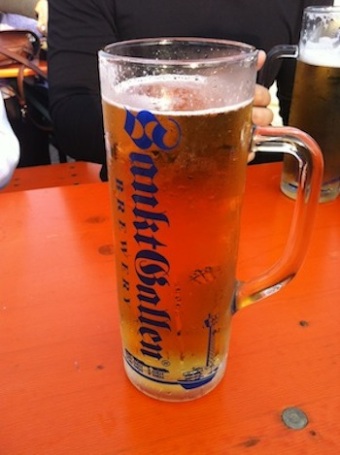