Ode to a Kotatsu: How to love the Japanese Winter

Nagano is cold in winter. Ok that’s not strictly true. Nagano is in fact, absolutely, bloody, freezing in winter, which perhaps explains the presence of a Winter Olympics here. It’s not Hokkaido but frankly it’s still pretty damn cold. Why is this an issue? Well, I live in Japan, possibly the only economically advanced nation in the world utterly bereft of insulation, double-glazing or central heating of any kind. So why do I not care about this? Because the Japanese have over the centuries come up with many interesting approaches to keeping warm on those crisp, cold winter nights.

The masterpiece of all this winter combating wonder is of course the kotatsu. In the grand scheme of Japanese heating gadgetry this is the last step. So I’ll come back to it in a moment.

First up, because the Japanese are usually very practical people indeed is warm clothes. Ok, I understand you were hoping for something more technologically advanced but as my erstwhile Swedish housemate once told me, he wasn’t a wuss for wearing thermal underwear during the British winter, rather he had a healthy respect for the cold. A respect, which we in England, he noted, lack to a quite insane degree. Any brief thought I may have had to defend my land was quickly dismissed by the unwelcome mental image of the average overweight Newcastle Utd fan on a Saturday afternoon in January; shirtless, rolls of fat cascading down over ageing denim and endless tattoos declaring an undying allegiance to the Geordie army whose main rival one might surmise to be the cold itself.

But back to Japan, with its citizens quite adamant about its clear and distinct four seasons (to the extent that my students always look rather smug when I explain the English seasons as one week spring, two weeks summer, a damp squib autumn and a never ending wet and windy winter), there is a quite dramatic shift in seasonal clothing as summer clothes get packed away and the autumn and winter wear is brought back from that nook in the bottom of the cupboard.

This dramatic a shift is to be expected really when all Japanese folk struggle with the fact that temperatures of twenty-two degrees and higher elicit a yelp of, “atsui/hot!” While twenty degrees and below elicits an immediate whimper from behind a scarf of, “samui/cold!” The magic temperature they all seek being a perfect twenty-one degrees, at which point they all get remarkably quiet, perhaps reveling in this moment of pure natural bliss while I interrupt their reverie by nervously muttering, “atatakai/warm? No…just me? OK… ”

Next comes all manner of electric blankets and under carpet/bed sheet heaters.  Each designed to keep you warm wherever you choose to plant yourself for the duration of the day because frankly, you’re not going anywhere. This is coupled with great big space heaters, occasionally with a hot plate on top for keeping a kettle full of water always ready for the gallons of green tea you are likely to consume in the course of trying to warm your poor frozen extremities.

But while all these things are necessary for one to get a cozy night’s sleep, or not to freeze your big toe off upon initial contact with the floor in the morning, they all pale in comparison to the mighty kotatsu.

The kotatsu is truly wonderful thing in my mind. The first thing I bought in Japan that turned my one room studio apartment, bereft of most furniture beyond the absolute bare necessities on my arrival, into something resembling a real home. Albeit, a perennially messy and cluttered one.

A kotatsu is essentially a blanket or duvet placed atop a low level table frame with the table top itself placed on top, thus sandwiching the blanket/duvet between the table frame and tabletop. In addition to this modern kotatsus have an electric heater installed on the underside of the table frame to heat the space under the table. To put it in a more western context, remember on cold winter mornings how you would clamber out of bed and drag the whole bed cover with you, wrapped around you and dragging behind as you went downstairs to watch Saturday morning kids television, before cable and satellite television killed off the children’s variety show that is. Now add a table so that you never, ever need move from your cosy spot in front of the TV, and that’s a kotatsu.

It’s also a way to be very lazy indeed. Without noticing your kettle will strangely migrate in the night to find a new home atop the kotatsu, soon your legs will rebel at the thought of ever leaving their cozy new home and bed will become a distant memory as you begin to nap beneath your new abode, content in the knowledge that when you awake the kettle is already in reach.

This winter is going to be very lazy indeed. 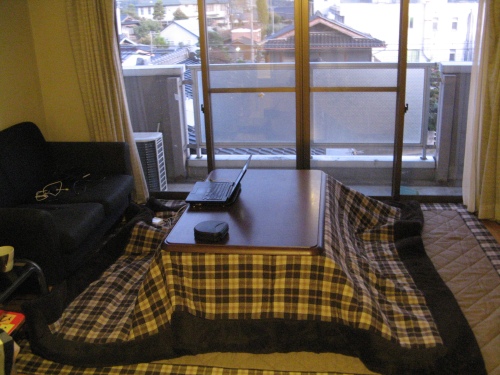 7 responses to “Ode to a Kotatsu: How to love the Japanese Winter”