A ball flies at over eighty miles an hour makes contact with hewn wood no more than 2.75 inches in diameter and promptly disappears into the distance. A crowd leaps to its feet and roars. I stand up too; a smile on my lips as I get a first hand impression of what from a distance seems to be a singularly simple action. Man throws ball, man hits ball. How hard can this all be really?

A football is booted over sixty yards across field and lands perfectly at the feet of an onrushing German gentleman of Turkish descent who recently relocated from Madrid to north London. He runs a little further before whipping the ball back across the pitch towards the feet of a six-foot-plus Frenchman who proceeds to, with his very first touch, volley the ball past the oncoming fifteen stone of goalkeeper heading his way and into the net. The crowd erupts, my jaw drops.

Technically my jaw dropped long before the ball reached the net. The exact time was when the ball made contact with said German’s left foot and the strip of Velcro he apparently keeps there.

I hand How to be an Alien by George Mikes, a guide to being a foreigner in Britain first published in 1946, at the page where the two lines on sex appear to my Japanese colleague. They read as follows:

My colleague smiles, a little nonplussed by the sentence but well aware there’s a joke in there somewhere. I read it and chuckle a little bit still on the fifth reading.

A computer, given one hundred thousand examples can learn to read the number five when handwritten. A computer taught the characteristics of handwriting via the medium of Russian poetry is able read such manner of scrawls after exposure to a mere three hundred poems.

That last example came from the wonderful online magazine Nautilus. Specifically its issue entitled Secret Codes and the piece entitled Teaching Me Softly. The article centered around the notion of ‘privileged information’ or in other words, knowledge gleaned from experience.

This kind of knowledge is why I can appreciate the reaction of baseball fans to a home run without actually appreciating the act itself. I’ve attended about five baseball games in my entire life and I’ve never really, truly played baseball. However, I’ve been and continue to be a long suffering fan of Huddersfield Town so I know what it means to be a fan, to live and die with a score line. As such that moment of pure joy, I get it. I just don’t get the action that prompted it. I understand less of it. I don’t know how hard it is to hit a ball like that, to stand up to the challenge of a ball being thrown like that. I’ll never understand it the same way a kid steeped in baseball will feel that rush.

I do at least understand football. Perhaps I even feel a greater appreciation for it because I was so awful at it; I know that simply trapping a ball, killing it dead in its place takes incredible skill. First touch is a magic and often under appreciated gift. If you’ve never really watched or played football and you’re wondering why one guy on the pitch always seems to have a second longer to make a decision than everyone else, that is it.

That experience is probably the same reason I hardly ever get angry with goalkeepers’ mistakes. After all, I was one of that nut job ilk.  All four feet nothing of me stood shivering between metal poles eight feet high. An education for how unfair life is if ever there were one.

It’s also the same reason why I think foreign language teachers should always have a second language aside from their native tongue. Because, in some small way it puts you in the shoes of every student you’ll ever teach and hopefully in doing so will make you a better teacher; at the very least, a more understanding person in general.

Combine it with being a fan of English football however and it just makes you more impatient with monolingual (and I’m being generous there) fans that complain when a new player or manager has not learned our twisted, garbled and illogical tongue in less than six months.

But privileged information, for all its value, is something of a double-edged sword. Because, while I may know what kouyou （紅葉）and momijigari （紅葉狩り）mean (ok, so might you Japanese speaking reader) and smile when I think of them; anyone who has no clue about what they mean and has never set foot in Japan in the autumn when the leaves are changing and gone autumn leaf viewing, is lucky.

Because, you still get to see it in person for the first time. While I just hope that I never stop seeing it with fresh eyes.

But then again, I’m just privileged to have seen it at all. 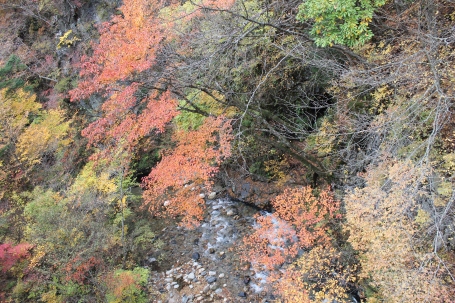