In Japan I have a peculiar relationship with technology, simply put, I just don’t get it.

Cameras are state of the art. Mobile phones are a generation or two ahead. The fax machine still prevails. Broadband Internet is around the fastest and cheapest around, yet take-up is lower than in the US and far lower than that of neighbouring South Korea. I can press a little red button in the Izakaya for instant service and my sushi can be delivered by tiny bullet train (it whisks specific orders directly to your table, as opposed to via the conveyor belt below from which anyone can pick up food). Vending machines greet me in a high-pitched yelp of digital politeness. Lifts in some government buildings appear to pre-date the buildings themselves. My sixty-year-old student can watch TV on his phone, but I don’t think he knows what Google is. When my high school kids tell me they were talking to their friend, they mean they were emailing them. Japanese people buy the best technology around… so long as it isn’t Korean, and then they do it again next year and the year after. The TV is always on, yet no one is ever watching it.

As I’ve noted before, the Japanese have a peculiar relationship with technology. Driven by a rapidly ageing yet economically driven society, consumer goods are constantly bought only to be dispensed with a year later for the shinier new model.

Japan seems to have an endless supply of engineers and a desire to have the best products in the world (look at Toyota’s misfortunate and excessively rapid expansion) yet, Apple’s attempts to get Macs into Japanese schools has been rebuffed with little thought. Technology is welcome in some spheres and clearly not in others.

At times, I find it difficult to cope with this contrast.

When I was younger, my relationship with technology was far more simply defined. My brother would convince me as to what now ancient games console I obviously wanted for Christmas. One so costly as to require the budgets from both our respective birthdays and Christmas days to be combined so that come Christmas morning we could open something that I had not known I had even wanted until a month earlier. Possibly as I hadn’t known of its existence until my brother made it abundantly aware that I too wanted it. Funny that…

While owning a games console, laptop and mobile has become an aspect of my life that I would find strange to do without now, other areas of technology have on occasion left me baffled. Particularly in Japan where I sometimes think that maybe, just maybe I’m too tall for it…

I was entering the gates of Fuji Q Highland, an amazing amusement park that sits just below Mount Fuji. I handed my ticket over and headed over to the machine where I would get my personalized ride pass. It was a metal box, akin to a photo booth without the curtain and seat. Instead of said seat there were two foot prints where one was supposed to stand. So there I placed myself, only to realize that the camera was about chest height on me. I crouched down a little to get my head level with the camera but nothing happened. Wondering if the damned thing was even working I leaned forward for a split second, the wrong split second as it happened. 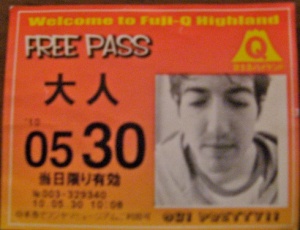 3 responses to “チーズ or Cheese: Technological Trouble in Japan”